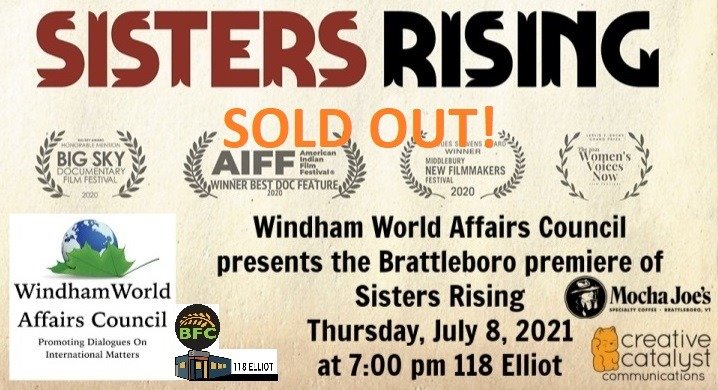 The event will be held Thursday, July 8, 2021, 7:00 pm at 118 Elliot. Like all WWAC events, the screening of Sisters Rising is free and open to the public. A suggested $10 donation will be accepted at the door. Capacity is limited. Folks who have not received the Corona Virus vaccine are required to wear a mask during this event.

As a part of the celebration of the 60th anniversary of Windham World Affairs council, Sisters Rising tackles the global issue of violence against indigenous women as a powerful feature documentary about six Native American women reclaiming personal & tribal sovereignty. Q&A with the filmmakers will follow the screening.

Native American women are 2.5 times more likely to experience sexual assault than all other American women. 1 in 3 Native women report having been raped during her lifetime and 86% of the offenses are committed by non-Native men. These perpetrators exploit gaps in tribal jurisdictional authority and target Native women as ‘safe victims’. Sisters Rising follows six women who refuse to let this pattern of violence continue in the shadows: a tribal cop in the midst of the North Dakota oil boom, an attorney fighting to overturn restrictions on tribal sovereignty, an Indigenous women’s self-defense instructor, grassroots advocates working to influence legislative change, and the author of the first anti-sex trafficking code to be introduced to a reservation’s tribal court. Their stories shine an unflinching light on righting injustice on both an individual and systemic level.

“The abhorrent violence that is a constant in the lives of Indigenous peoples impacts Indigenous women first,” says Co-producer Jaida Grey Eagle (Oglala Lakota), “We are on the frontlines of an ongoing legacy of violent colonization, and it is vitally important that the world see and hear us.”

“In a portrait of six brave participants who refuse to let a pattern of violence against Native women continue on in the shadows, this film shines an unflinching and ultimately uplifting light onto righting injustice on both an individual and systemic level.” – Big Sky Jury Statement about Sisters Rising.

Windham World Affairs Council is celebrating its 60th year bringing topics and issues of global importance to the people of Windham County with free, high-quality programming. WWAC is the smallest member of the national organization World Affairs Councils of America, and the only one run entirely by volunteers. Annual memberships support the operating costs of the WWAC. If you are interested in learning more about
WWAC find further information on the website: www.windhamworldaffairscouncil.org.

Join the Sisters Rising afterparty with Willow and Brad by becoming a member or renewing your WWAC membership at www.windhamworldaffairscouncil.org/membership-application/

WILLOW O’FERAL is the award-winning director, producer and cinematographer of two feature documentary films. Sisters Rising, a feature documentary about six Native American women fighting to restore personal and tribal sovereignty in the face of sexual violence against Indigenous women, premiered at the 2020 Big Sky Film Festival where it was nominated for the Big Sky Award. Sisters Rising has been awarded Best Documentary Feature 2020 at the American Indian Film Festival and Best Film Award at the Women’s Voices Now Festival 2021, and the Thaddeus Stevens Award at the Middlebury New Filmmakers Festival. Her 2018 documentary Break the Silence: Reproductive & Sexual Health Stories was awarded La Frontera Queer Film Festival’s Best Documentary Feature Award and Planned Parenthood of Northern New England’s Choice Champion Award. Willow is a member of New Day Films, the longest-running distribution cooperative for independent documentary filmmakers in the US.

BRAD HECK is a filmmaker, cinematographer, and educator. Sisters Rising is Brad’s directorial debut. He co-produced Willow O’Feral’s feature documentary Break the Silence: Reproductive & Sexual Health Stories, and is a co-founder of Haptic Pictures production company. Previously in his career he worked as a cinematographer on commercial and independent projects, including documentaries featuring diverse visionaries such as Barack Obama, Howard Zinn and Miranda July, and was awarded a regional Emmy for his cinematography work for BRIC Media in NY. Brad is currently the Director of the MFA in Film Program at the Vermont College of Fine Arts.

O’Feral and Heck are alumni of Marlboro College, formerly located in Marlboro, VT.