Article originally By Olga Peters at The Commons

VERNON—The audience filled most of the folding chairs arranged before the stage in Vernon Elementary School cafeteria on a crisp night on Oct. 16, as the Windham-1 house candidates, Sara Coffey, Democrat of Guilford, and Patrick Gilligan, Republican of Vernon, sat at a folding table awaiting questions.

Moderator Martin Langeveld explained that the candidates had a few minutes for opening — and later closing — statements. He had reserved the bulk of the evening for audience questions.

In their opening statements, the candidates outlined their connections to Vermont. They also outlined the skills they could bring to the Statehouse.

Coffey, who is married, a mother, an entrepreneur, and declared her candidacy early in the spring, spoke first. She shared experiences growing up in Massachusetts. Her family relied on food stamps, she said. Her family’s economic struggles taught Coffey resilience and the importance of caring for others. From her mother, Coffey said she learned optimism.

Vermont is home despite growing up in Massachusetts, she said. Coffey added that the issues facing her adopted home like poverty, an aging population, and attracting young people concern her.

Still, “every night when I came home from door knocking, I felt so optimistic,” Coffey said.

According to Coffey, her 25 years as an executive director of small arts organizations has prepared her for serving in the House. Executive directors do everything from managing staff to building budgets, creating websites, and even taking out the trash, she said.

As a representative, Coffey described herself as “someone who can look at complexity and work on successful projects.”

If elected, Coffey hopes to serve on the economic development committee.

Gilligan, a recent college graduate who ran a write-in campaign in the primary, said he is a sixth-generation Vermonter.

It’s hard being young in Vermont, Gilligan said. “We can’t afford to live here. Affordability is a big deal in this state. It’s hard to make it in Vermont if you’re young.”

He said changing that scenario was a big part of why he decided to run.

Gilligan said he started Castleton University’s Republican’s Club, but at 23, he hasn’t had much time to establish other projects.

If elected, Gilligan hoped to serve on the House Education Committee. He said he wanted to “keep our small schools open.”

What do you hope to accomplish in your first term?

Gilligan said he would concentrate on education reform. For example, Gilligan hopes to delay the state’s forced mergers of some schools. Gilligan also pledged to amend Act 60 — Vermont’s education finance law — to give more money to independent schools.

When he knocked on doors, Gilligan said, voters told him they don’t want Act 46. They worry about property taxes, he said.

“The big problem is Act 60,” he said. “All districts should be independent and self-funding.”

Coffey agreed that education spending worried her. She spoke about the complexities of poverty, unfunded mandates, and the costs of special education.

“The working-class people of our two towns can’t afford this,” she said.

Both candidates agreed that they wanted to protect Guilford and Vernon’s elementary schools. Coffey noted that she supported the alternative governance proposal put forward by the Guilford community.

She said Vernon had done right by its school by withdrawing from the BUHS #6 school district. Coffey also added a caveat, regardless of how people feel about Vermont’s school governance law — Act 46 — that spurred all these actions, it is still a law.

“Public education will be a challenge,” she said. “In our towns, [schools] are the center of our community and form our identities.”

Coffey noted that Act 46 was signed into law in 2015. For now, school mergers remain in the hands of the state Board of Education. According to Coffey, voters shared their worries about rising property taxes. Education drives a large portion of the property tax, she said.

Last year, Gov. Phil Scott and the Legislature used one-time funding to keep property taxes down, she said. In the new budget cycle, that money won’t exist. So legislators must work hard and collaborate to reign in spending while focusing on economic development.

He added that he did support law enforcement’s ability to remove guns from a home in the case of domestic violence and those at extreme risk. Gilligan also favors concealed and open carry laws.

Coffey said that she doesn’t own a gun. Her husband does, however. The couple allows people to hunt on their land.

She said she supports Second Amendment rights. She also believes in “common sense gun reform.” If Coffey had served in the Legislature in the last session, she would have voted in support of the gun reform bills. She has no plans to push harder on gun legislation, Coffey said.

On the issue of taxes, Gilligan pledged to lower them, and do away with income, inheritance, and corporate taxes.

There are too many taxes in Vermont, he said.

Coffey said that she’s not in favor of raising taxes. But, she added, she also understands that taxes pay for services like roads and schools.

Vermont needs to rethink education funding, Coffey said. Education is paid through property taxes. The problem is, families can be property rich, but cash poor.

Coffey said she wanted to work across the political aisle and explore the funding proposals put forward last session. Those proposals would pay for education through an income-based tax or a combination of income and property tax.

Coffey responded that as the mother of two teens, she’s “not crazy” about legal access to pot. As a state, however, Vermont is missing an opportunity to raise revenue.

She felt marijuana needs the same regulation as alcohol and cigarettes.

Medical marijuana is fine, he continued. Recreational use is not.

Gilligan felt “pessimistic” about the ability to wire every Vermont home with broadband. It’s too expensive, he said. According to Gilligan, his father worked for a communication company. He said his father said the cost per household would be too high.

Coffey said, “We can’t afford not to improve broadband.”

The state needs a new approach instead of relying on cable or other communication companies. As a small-business owner, she felt very frustrated by the lack of a strong internet. Coffey said the rural electrification project was one interesting model.

“If we don’t take care of rural communities, we’ll be left behind,” she said.

Health care is a human right, Coffey said. Providing universal health care in Vermont is a challenge because the state’s pool of residents is so small.

Instead, the state needs to examine models that have worked. As an example, Coffey said veterans have praised the Veterans Administration’s Tricare program.

Access to affordable health care, housing, and childcare are three things voters have told Coffey are unaffordable in Vermont.

Coffey discussed the potential of Vermont’s creative economy. According to her, the creative economy is 8 percent of the state’s economy, approximately the same percentage as agriculture. The state also has the potential to attract more digital workers. They need access to workforce housing, however, which the state don’t have enough of right now.

Gilligan said he would vote against a universal health care plan. He said he feels the model limits coverage choice and does away with competition. If the coverage is terrible people have nowhere else to go. Instead, hospitals and insurance companies will get to dictate what they charge, he said.

“I’m for anything that’s free market,” Gilligan said. He said Vermont needs a mix of jobs, especially in the industrial sector.

When asked if the candidates would “encourage a refugee influx” to Vermont, Gilligan said he wouldn’t comment on national issues.

Coffey responded that attracting refugees to Vermont is not only a national issue. According to her, Burlington has a refugee center and it’s brought cultural and economic richness. Still, Windham County may not be ready for such an influx as it needs a stronger economy. Refugees need good paying jobs and housing too, she said.

A question posed to Coffey asked if she had ever stated anything in an interview that could be considered racist, sexist, or overall misleading?

Coffey’s response of “no,” was followed up by an audience member referencing a satirical video by a young woman discussing sexual assault on Coffey’s private Facebook page.

The audience member characterized the video as alluding to all men as sexual predators.

Coffey said that, throughout her career, she has operated around the core values of equity, access, and visibility to unheard voices.

“I’m a pretty fierce supporter of women’s rights and women’s reproductive rights,” she said. She characterized the video as humorous and telling women to get out and vote.

Gilligan followed up the audience member’s question. He took issue with Coffey’s remark in an interview where she said that women need to be asked more than men to run for office.

Gilligan said running for office should be about finding qualified candidates. Not about gender.

Coffey responded that in her experience and in the experience of women she’s spoken with, they needed to be asked multiple times before they agreed to run.

In a follow-up question, the candidates were asked how they thought young men felt when they were called names like “rapist” or “racist?”

Gilligan said, that if a woman is sexually assaulted, she should report it to the police. Law enforcement will look at the situation. If it’s appropriate, the case will go to court and the court will handle it.

Coffey answered that she didn’t know how a young man would feel. She’s not a young man. She could respond as the mother of a 16-year-old son. It’s hard to raise a strong son, Coffey continued.

In his statement, Gilligan said, if voters didn’t like what’s happening in Montpelier then “I’m your man.”

Gilligan said he’s in the house race because he loves Vermont. Still, for his generation, it’s tough to find a reason to stay. For many of his peers, it’s easier to move to New Hampshire and start a business.

Coffey thanked everyone for coming to the forum.

She said that she and Gilligan both cared about Gilford and Vernon. Their approach to issues is what separates them, in her opinion.

Coffey reminded people that she’s “fiercely optimistic” and sees the world as complex rather than black and white.

“With your help I will work for you,” she said. 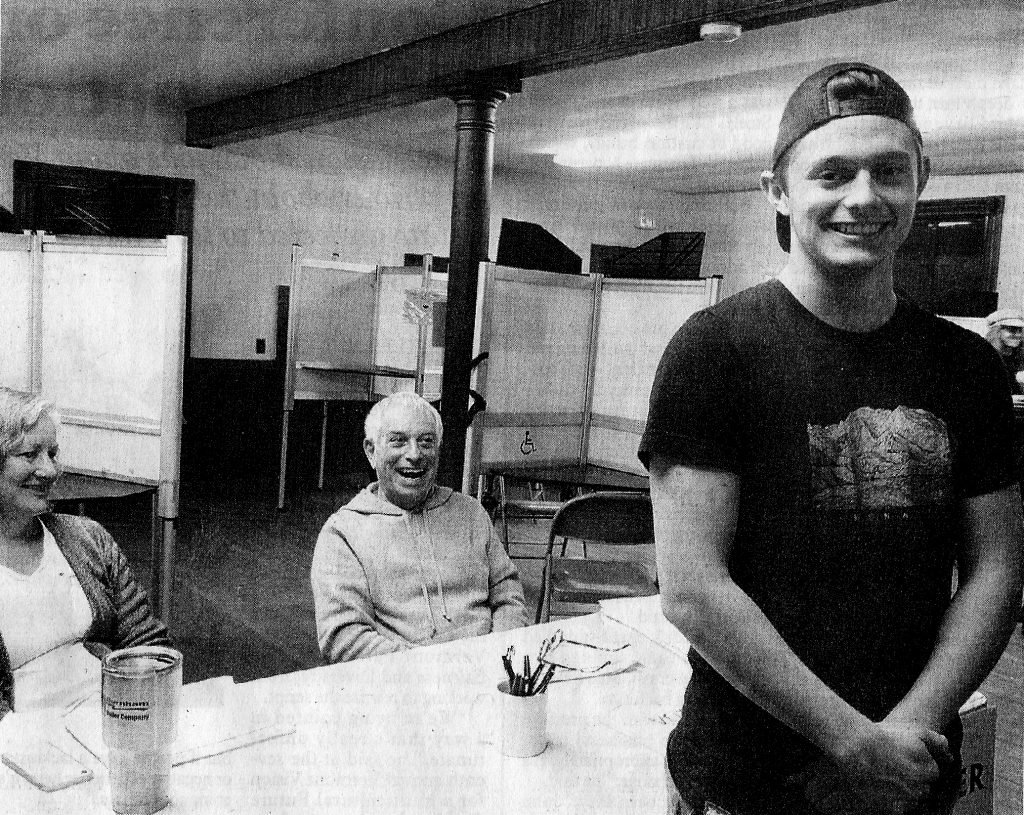